Pericoronitis is a common dental problem of the gums in young adults at the age of 17-24 when the wisdom teeth normally erupt (break through the gum) in the mouth. It is a painful inflammation caused by the infection of the soft gingival tissues (gums) over or around a partially erupted tooth, most often a wisdom tooth. The development of pericoronitis is one of the common causes for the extraction of a wisdom tooth. 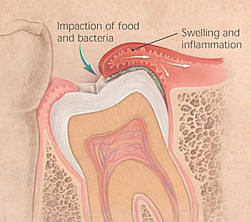 Pericoronitis is a condition with an aetiology that is almost always associated with tooth impaction, and especially with impacted wisdom teeth.

The third molar teeth, better known as wisdom teeth, start to erupt at the age of 17 and the eruption of all four teeth is usually completed by the age of 24. Sometimes, depending on the size and structural characteristics of the jaw bones and the rest of the teeth, there is not enough room in the back of the mouth for the wisdom teeth to erupt normally.

If there is a problem, a wisdom tooth may:

Complete or partial failure to erupt is referred as ‘tooth impaction’ and the affected 3rd molars as ‘impacted wisdom teeth’. Generally, a pericoronitis infection will be caused by:

Other factors which are considered that predispose to pericoronitis are emotional stress, fatigue, upper respiratory tract infections, second trimester of pregnancy and menstruation.

Pericoronitis may affect any tooth that has eruption problems and becomes impacted, but since impaction is a very rare condition in the rest of the teeth, it most often occurs with the wisdom teeth, most commonly those of the lower jaw. Pericoronitis is a main cause of wisdom tooth pain.

What Are the Symptoms of Pericoronitis?

Symptoms of pericoronitis can include:

How Is Pericoronitis Diagnosed?

Pericoronitis is easy to diagnose during a clinical examination. In most cases the swelling of the gum tissues around an impacted tooth is a clear and very obvious sign of pericoronitis. The gums are red, swollen or draining fluid or pus.

If pericoronitis is caused by a partially erupted or impacted tooth then the dentist will usually take an X-ray to determine the exact position, size, alignment, and orientation of the tooth and decide about the treatment accordingly.

The dentist will also look for other symptoms that may indicate that the swelling and infection has spread beyond the jaw to the cheeks and neck. In severe cases of pericoronitis the infection may spread into surrounding tissues, developing to cellulitis, a very serious, often life-threatening infection that must be treated quickly to prevent further spread and possible swelling of the airway.

Depending on the etiology, symptoms, and severity of pericoronitis the dentist may recommend a combination of the following treatments:

Usually, the symptoms of pericoronitis can be relieved with conservative treatment in about one week. However, if the tooth is partially impacted and food and bacteria keep building up under the gum, pericoronitis will more than likely return. The only permanent solution for the treatment of pericoronitis is the extraction of the impacted wisdom tooth.

The only thing a patient with an impacted tooth can do to prevent pericoronitis is to take extra care for the oral hygiene around that tooth, and try to avoid injuring the area with hard foods. Unfortunately there is not much that can be done to prevent the impaction of a tooth. Many dentists suggest that wisdom teeth should be extracted right after their eruption, because they will cause problems sooner or later. However not all dentists agree with this approach.

next page -> Types of Gum Disease