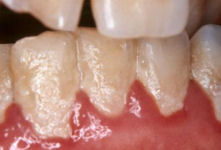 Dental plaque is an almost invisible film of bacteria that accumulates on our teeth and gums (especially in the spaces between the teeth and along the gum line). If dental plaque is not removed regularly from teeth, it can cause tooth decay and dental cavities (caries) or periodontal problems (such as gingivitis and periodontitis).

What is Dental Plaque

Dental plaque is a sticky, soft and almost colorless layer of bacteria that constantly builds up on the surfaces of teeth and gums. It is comprised of colonies of bacteria and other microorganisms mixed with bacteria by-products, saliva, dead cells and food residuals. In addition to the bacterial cells, plaque contains a small number of epithelial cells, leukocytes, and macrophages. Inorganic components are also found in dental plaque; largely calcium and phosphorus which are primarily derived from saliva. 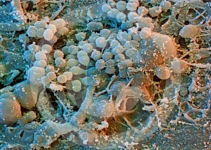 About 400 different species of bacteria take part in the formation of dental plaque. A variety of different bacterial forms (cocci, rods, filaments) can be found. It is estimated that dental plaque contains 1010 bacteria per mg. In the intitial phases of dental plaque formation, most of them are harmless bacteria, naturally found in the mouth's normal microbial flora.

If dental plaque is not removed with proper oral hygiene, the bacterial layer becomes thicker and its composition changes. Bacteria strains, related with causing dental diseases, start to become dominant, and the risk of tooth decay and gum disease increases.

The most usual classification of dental plaque is based on its relationship to the gingival margin (the line where the crown of the tooth meets the gums): 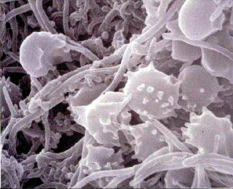 The pellicle is then colonized by Gram-positive bacteria such as Streptococcus sanguis, Streptococcus mutans, and Actinomyces viscosus becoming what is known as dental plaque. Bacteria cells interact with pellicle components enabling plaque to firmly adhere to the tooth surface.

After 1 to 3 days following the initiation of plaque formation:

Substances produced by the already accumulated bacteria enrich the plaque environment making it favourable for the growth of other species of bacteria. One week after the first plaque accumulation, new Gram-negative species may be found, such as Porphyromonas gingivalis, Campylobacter rectus, Eikenella corrodens, Actinobacillus actinomycetemcomitans, and oral spirochetes (Treponema species).

As the dental plaque matures, when it is not cleaned properly, its composition changes in favour of anaerobic bacteria especially at the lower layers of plaque, nearest to the tooth surface. Their anaerobic respiration produces acids which consequently lead to :